Just how powerful is brand loyalty? Is it powerful enough to overcome the immediate satisfaction of a consumer getting what he or she wants? Those questions should be central to any discussions regarding geo-location. The technology is evolving and becoming more precise, enabling marketers to approach new prospects from different angles. 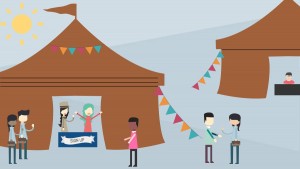 Read on for an interesting use case, and several thoughts on how geo-location can change your campaigns.

Politics are the one place you might think brand loyalty trumps all else. People are still sporting Obama stickers on their cars, and were supporting Bush stickers even before that. It’s like football, once a fan always a fan.

What Eric Garcetti found was that matching offline voter data to online placements could turn non-voters into potential voters, a kind of mobilization effort.. The newly elected Mayor of Los Angeles won his election thanks in part to voter profiles his team helped assembled based on voter data they had on hand. They were able to use that data, along with location data, to reach a new segment of voter and secure the win.

The Garcetti case presents some interesting ideas on location data. Location does play a role in how we think; someone in an upper class neighborhood will likely have different priorities from those in a lower class one. However, the Garcetti campaign still utilized messaging to drive users to action. It also had to be sustained to be effective, so there was an element of branding too. Immediacy can’t overcome loyalty in every case, but knowing what people want and where they are helps you tailor messaging that drives them to action.